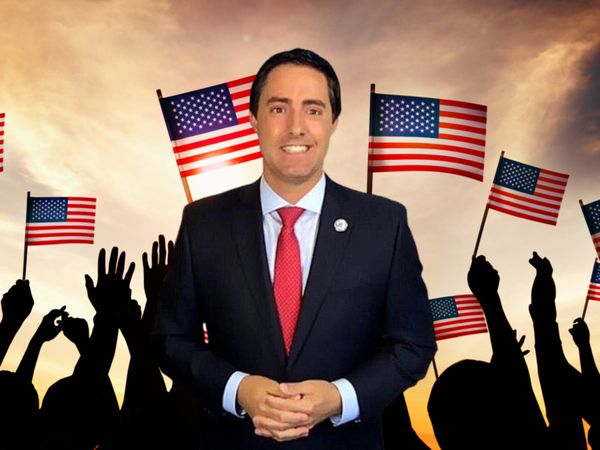 From an early age Frank LaRose committed to putting the needs of others before his own and leading by example. Frank is a decorated combat veteran, member of the U.S. Army Special Forces, and family man who currently serves as Ohio’s 51st Secretary of State. He works  every day to build a thriving democracy and prospering economy for every Ohio family.

Frank grew up working on a small family-owned farm outside of Akron and first learned about his duty to serve others and live with honor as a Boy Scout. He eventually earned the rank of Eagle Scout. Inspired by the example of his scout leader, a WWII concentration camp liberator, he enlisted in the US Army and left for basic training just weeks after his high school graduation.

ARMY GREEN BERET AND BRONZE STAR RECIPIENT
Frank is a decorated combat veteran with more than a decade of service in uniform. He is a U.S. Army Special Forces Green Beret who earned a Bronze Star for his service in Iraq and has defended US interests around the world including in Iraq, Kosovo, Africa, Oman and on the US/Mexico Border.

During his deployments to Iraq and Kosovo, he witnessed first-hand as people risked their lives to vote and participate in elections for the first time. That experience continues to motivate his dedication to protecting our voting rights here at home.

A conscientious and principled approach to solving problems
Frank LaRose was elected as Ohio’s 51st Secretary of State in 2018. In this role, Frank serves as Ohio’s Chief Elections Officer, with the responsibility of overseeing secure and accessible elections. His office also serves as the front door for new businesses in the Buckeye State. He often reminds his team of their two main missions: helping Ohioans vote and helping Ohioans start businesses.

During his first term in office Ohio shattered records for both voting and entrepreneurship. Frank led Ohio through the 2020 presidential election – the toughest election in the state’s history. Despite the monumental challenges posed by the pandemic, Ohio conducted its most successful election ever.Ohio not only had record turnout and unprecedented transparency but also honest and accurate results. While other states struggled, Ohio was recognized under his leadership, as a national model for safe, secure, and accessible voting. And Ohioans know they can trust their elections. As Secretary of State LaRose also set an all-time high for new business creation – with over a quarter million businesses started during the first two years of his term.

Prior to serving as Ohio’s 51st Secretary of State, Frank served two terms in the Ohio State Senate. Then Senator LaRose sponsored legislation to modernize online voter registration, audit election results to verify their accuracy, cut burdensome regulation on small business, and protect our freedoms and values. LaRose has been repeatedly been recognized as a problem-solver who works with others to get the job done. He built a reputation in the Senate as a principled conservative who stood up for free-market capitalism, fought to reduce government, protected our second amendment rights and always stood for life.