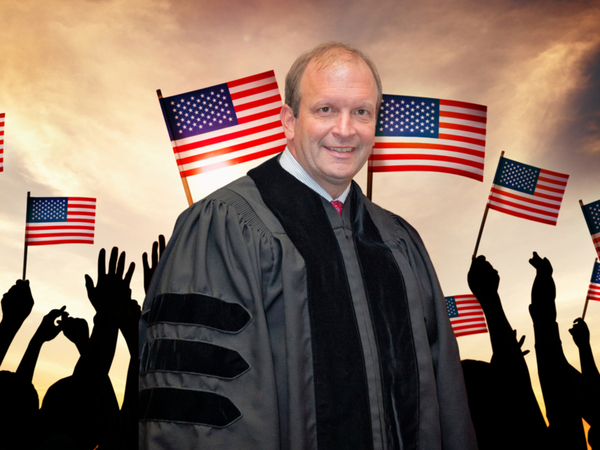 Justice Pat DeWine began his six-year term on the Supreme Court of Ohio on Jan. 2, 2017, following his statewide election in November 2016. An excellent writer, Justice DeWine is known for the quality and thoroughness of his legal opinions. His opinions reflect his strong belief in judicial restraint and his respect for the constitutional roles of the other coequal branches of government.

After law school, he was selected for a clerkship on United States Court of Appeals for the Sixth Circuit. He served under the Honorable David A. Nelson, who had been appointed to the Sixth Circuit by President Ronald Reagan.

Justice DeWine understands the litigant’s perspective, having practiced law for 13 years with one of Cincinnati’s top law firms, Keating, Muething & Klekamp. He represented clients in appellate matters in Ohio and in federal courts across the country. He handled a diverse range of litigation matters, including mass tort bankruptcies, securities fraud litigation, and constitutional issues.

Justice DeWine brings a unique perspective to the bench because of his public service as a County Commissioner and a member of the Cincinnati City Council.

As a member of the Hamilton County Board of Commissioners, he focused on reforming County government, lowering the tax burden, eliminating unnecessary bureaucracy and promoting public safety. He led the citizens referendum that ultimately repealed the nearly $1 billion sales tax increase that was enacted by his colleagues on the Commission. The Reason Foundation named him an “Innovator in Action,” along with such leaders as Rudy Giuliani and Jeb Bush, for his efforts to reform County government.

On Cincinnati City Council, he was known as a taxpayer watchdog, successfully rooting out wasteful spending and abuse in city government. He helped eliminate unnecessary regulations, led the effort to crack down on quality of life issues affecting city neighborhoods and created a development fund that leveraged private capital to spur new housing development downtown and across city neighborhoods. He also led the Issue Four charter change that created a more accountable city government by allowing the city to hire the most qualified individuals for key positions in city government.

He was a founder of the Build Cincinnati reform group that successfully passed a charter amendment to allow Cincinnati voters to directly elect the Mayor.