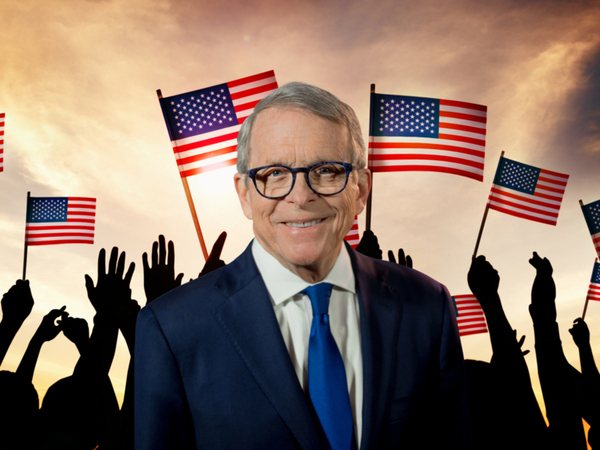 Mike DeWine for Governor of Ohio

Family
In many ways, Mike DeWine’s upbringing is the Ohio story. He was raised in Yellow Springs, Ohio, and met his wife, Fran Struewing, in the first grade. They got married between their sophomore and junior years at Miami University and have been blessed with eight children and 23 grandchildren. Family is at the core of everything Mike DeWine does, and that’s why he has devoted his life to fighting for Ohio’s families. He knows that when families are strong, our communities are stronger and our future is brighter.

Vision
Mike DeWine loves Ohio and cares passionately about our state’s future. He knows that every parent wants their kids to have an opportunity for a solid education, a healthy life that is free of drugs, and a good paying job later in life. Republican leadership has righted the ship in Ohio, but Mike knows that we have a chance to propel our state even farther ahead.

Mike knows that for our state to succeed in the future, we have to take efforts to create and retain jobs in Ohio to the next level. By curbing excessive taxation and burdensome regulations, his focus will be on creating a more inviting business environment and bringing and keeping jobs in Ohio.

Growing up, he loaded seed bags onto trucks and boxcars, shoveled wheat out of trucks during harvest, worked in wheat fields to help ensure the purity of the seed, and basically did whatever it took to get the job done for their customers. Inseparable to the end, his parents were married for 65 years and died within four days of each other. The values he learned from them still live within him today.

Accomplishments
In 2014, Mike DeWine won 83 of 88 counties and was re-elected Ohio Attorney General by a 23 point margin! Each day, his office deals with some of the largest barriers our state is facing: drugs, crime, and kids who are growing up in fragmented families. Mike has taken action and has made a real difference in people’s lives because he believes that public service is a public trust.

When he discovered that many law enforcement agencies in the state were in possession of rape kits that had never been sent to a DNA lab for testing, he hired ten additional forensic scientists to test back-logged kits as quickly as possible. As of June 1, 2017, the testing has led to 4,578 hits in the Combined DNA Index System, linking crimes to offenders, identifying serial rapists, and giving law enforcement agencies critical evidence to help solve brutal attacks.

Service
Attorney General DeWine has a long and distinguished career in public service, focusing on protecting Ohio children and families. DeWine served as Greene County Prosecuting Attorney, in the Ohio State Senate, in the United States House of Representatives, as Ohio Lieutenant Governor, and in the United States Senate.